Sailors can adjust the distance between the upper and lower gudgeon, thereby enabling compatibility with diverse boat transoms/sterns. The upper gudgeon slides freely along the rudder box track. Position it according to your boat's specific transom/stern dimensions and fix it in the track by screwing in the four screws supplied.

Variants of a rudder setting with holes in the gudgeons. 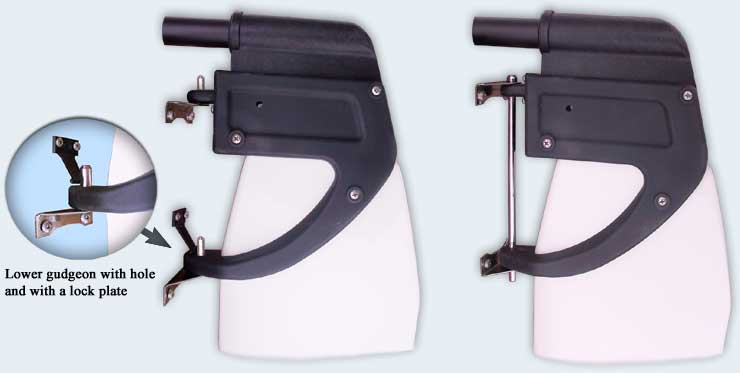 Variants of a rudder setting with pins in the gudgeons.

When installing, make sure the upper gudgeon swivels freely when the rudder is turned

The track of the rudder box should not be obstructed by any transom/stern fitting when the rudder is turned one way or the other.

The lower gudgeon can encounter boat transom/stern fitting/s when the rudder is turned one way or the other, without any problem. 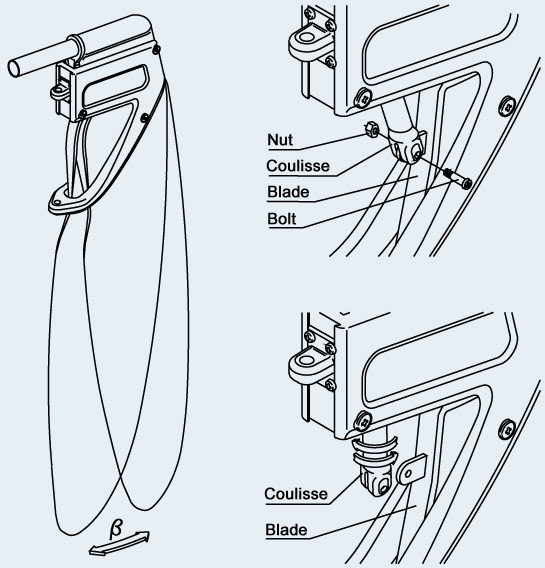 Adjusting the Pressure under which the Rudder Kicks Up
You can easily adjust the rudder to kick up at various pressures with a 3-position rubber stopper (located on the inside of the rudder box). 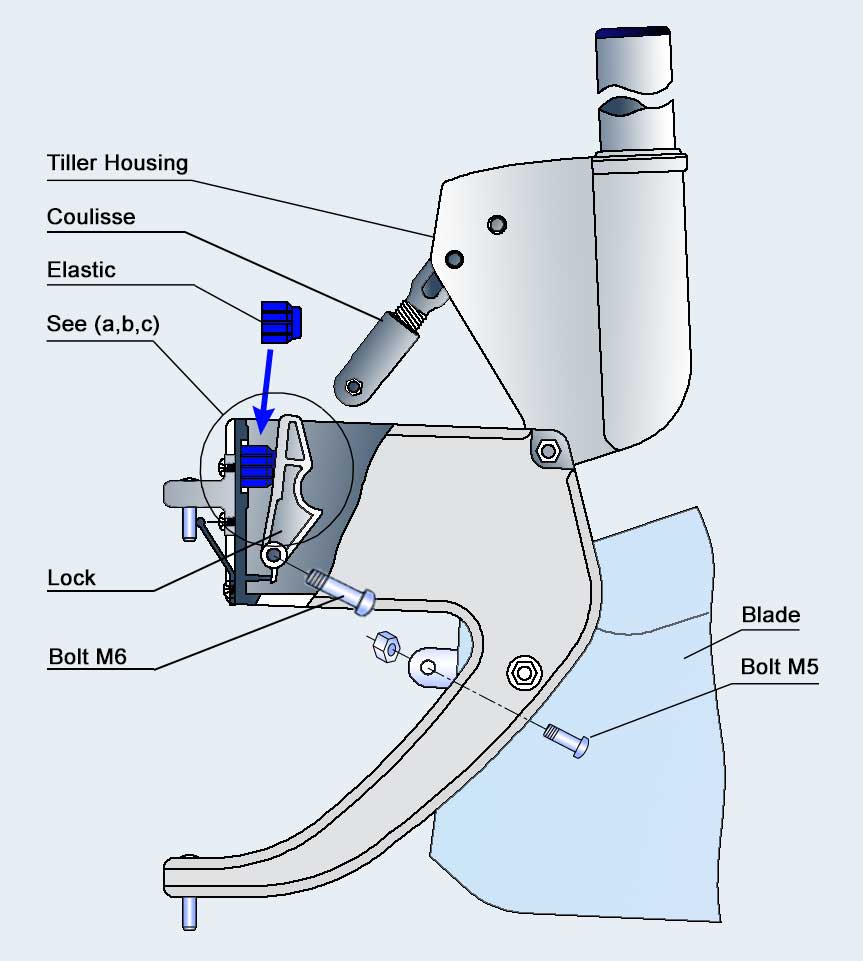 To open the rudder box in order to adjust the rubber stopper, disconnect the coulisse connector from the blade by undoing the nut and removing the bolt.
Lift up the tiller housing.

Unscrew the bolt on the Lock.
Insert the rubber stopper into the position you require (see a, b, c below).
Reassemble the system (reconnect the blade to the coulisse connector and close the tiller housing).
Check to verify that the pressure required to kick up the rudder matches your requirement.

Three rubber stopper positions for 3 levels of pressure under which the rudder kicks up.

Disabling the Kick-Up Feature, Fixing the Blade in its Vertical Position 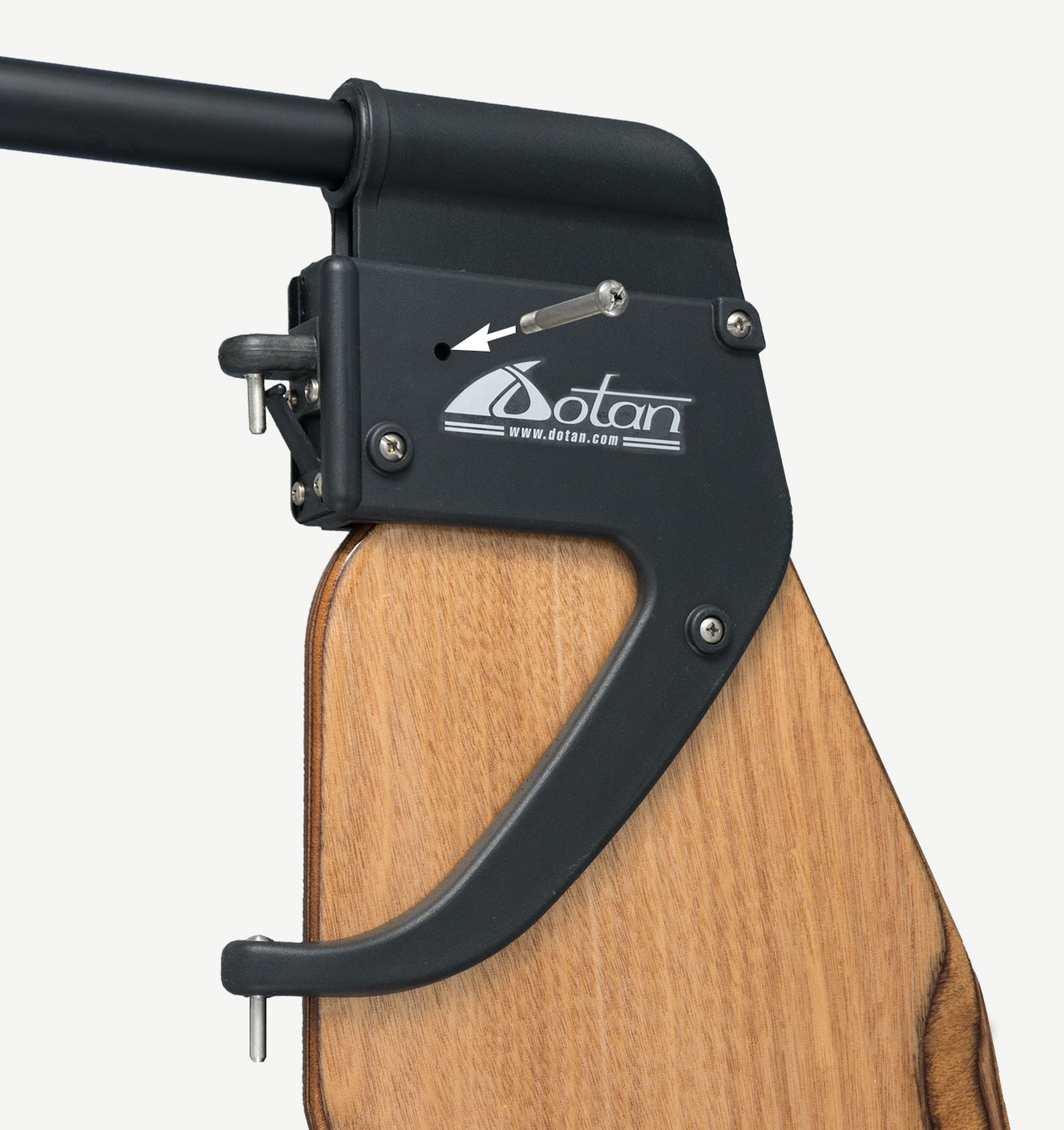 The Dotan's kick-up feature can be disabled by an optional lock-pin feature. The lock-pin can optionally be inserted into the rudder box's lock hole, fixing the blade in an up or down position, thereby disabling all kick-up/lowering capability.

If you use this feature, don't forget to remove the pin before putting to shore!

You can use this feature when: